Reflections on Identity and Belonging in times of Coronavirus

Having No Default: Living in the Present reflections on Identity and Belonging in times of Coronavirus

Covid19  changed our lives in many unexpected ways. It made us wonder about how do we live our lives, where and with who. All of a sudden the theoretical question: “Where will you go if everything is falling apart?”  felt very real.

The coronavirus is limiting our mobility and forcing us to rethink many things including our location in the world and what happens when our global mobility is taken away.

As we began to ask more globally nomadic people where they could run for a sense of safety and rest if or when life fell apart, we discovered that a growing number of them can’t answer this question easily.

They have no default.

Even more, in the same family, there might be very different choices for where each member felt would be the best place to run or move to when life fell apart due to the loss of job, civil or international war, internal family problems, or a world epidemic.

So how did this happen? Thirty plus years ago, the term third culture kids (TCKs)--children who grow up outside of their parents’ passport country or countries generally because of a parent’s career—was not widely known. As researchers explored this topic, one of the most universal characteristics many in this population shared was difficulty in answering the questions “Where are you from?” and “Where is home?”

By now it is well known how a globally mobile upbringing is responsible for the fact that many TCK’s often lack of a sense of wholly belonging to one particular place and can develop a rather complex sense of identity. Frequently when asked “Where are you from?”, they may answer “Everywhere and nowhere.”  If asked a similar but slightly different question, “Where is home?, we hear a common response: “Wherever my family is.” In other words, for many, their sense of belonging and identity relates to relationships, not geography.

In 2002, the term cross-cultural kid (CCK) entered our lexicon as we sought to describe how the cultural shifts and changes in our world were affecting more than the traditional TCKs. The amount of cultural mixing and matching for countless children is mind-boggling. In some situations we have met children who carry 4 or 5 passports and some who only carry one, but the places of cultural interactions in their world are many. In this complexity, they can develop what Doni Ambrosine, founder of Cultures magazine calls “culturally fluid’” identities.

In our early days of trying to understand the TCK story, we assumed these questions of identity and belonging were specific to the TCKs, and later CCKs, but not their parents.

Throughout my work with countless adults in my counselling practices, I realised that these questions of identity do not only apply to children. Many adults I met seem to feel the same say. Even some who grew up in one place, grow up in a mono culture environment, have lived in different places and countries as adults now that they, too, have no default when it comes to trying to name a place that they consider would be their landing spot if all else failed.

In the days when most parents of globally mobile children did have a default answer for the question of at least “Where are you from?,” their children also presumed the parent’s answer was their’s as well…at least until they tried to repatriate. At that point it wasn’t always so clear!

So what is happening now? These early TCKs and other cross-cultural kids (CCKs) have become adults. Often they are parenting the next generation of TCKs/CCKs meaning that many who have no default place of their own are now the parents of this generations’ TCKs!!! What happens to a family when the parents themselves have no clear default answer for where they belong or where they come from? What happens when this new generation of TCKs and other CCKs try to answer these questions? What happens when every child in the family has a different default for where they consider ‘home’? Where does this new global reality take us?

On top of that, some adults who begin life in a more traditional mono-cultural community, have travelled so much as adults they also have lost the sense of having a default place where without question they feel they can return to and belong. By now life has changed them and their outlooks in too many ways.

The truth is that in the changing reality in which both the generation of the parents and the children are much more mobile and the cultural diversity within families is growing, having one clear answer either as an individual or as a family  doesn’t represent the reality of today’s world anymore.

In another article I wrote, I suggested that the current tension in today’s world is between Globalism/Nationalism and one of the outcomes is complex identities. So maybe the new model is a generation of no boundaries and no default sense of identity? What can be the challenge with that?

The anchors and mirrors of identity formation

Identity is formed in a long process during many years.

Philosopher, Barbara Knuckles, explains that typically there are three major contributors to that formation. Our family, our community and the geographical place we are living in.

As she demonstrates in the following models, these three are the main anchors that shape how we answer the question “Who am I?”

In times of less mobility when our families tend to stay together in the same geographical place surrounded with a stable community it was easier to answer that questions. In such a place where most people in those realms shared a similar culture and value system, it was easier to develop a clear sense of being in cultural balance where we knew what the rules were for our society, we knew how life worked in this place and what was expected of us. Such security added to a deep sense of belonging. Basically, it was simple to define who was in and who was out. 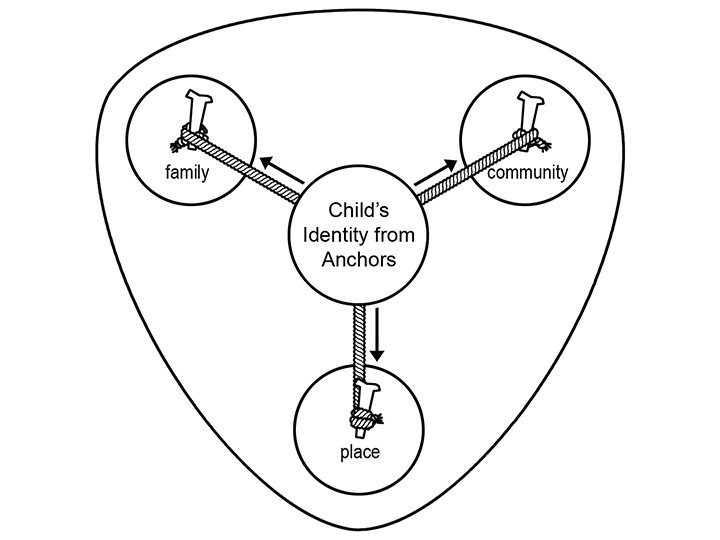 Nowadays we see changes in all three anchors and mirrors but more importantly the model is becoming much more dynamic.

In today’s globalised world,  we see a growing population of people that are starting or continuing their life without that secure default. There are  many reasons for this, such as growth in mobility, technology, political changes, liberalism in some part of the world, cross culture families and much more.

In the past as we considered how TCKs’ identity changed due to international mobility, we assumed their parents had been raised mono culturally. It seemed  we were talking about movement from one distinguishable identity their parents’ possessed into a creation of a slightly different sense of identity for the children due to an international move: 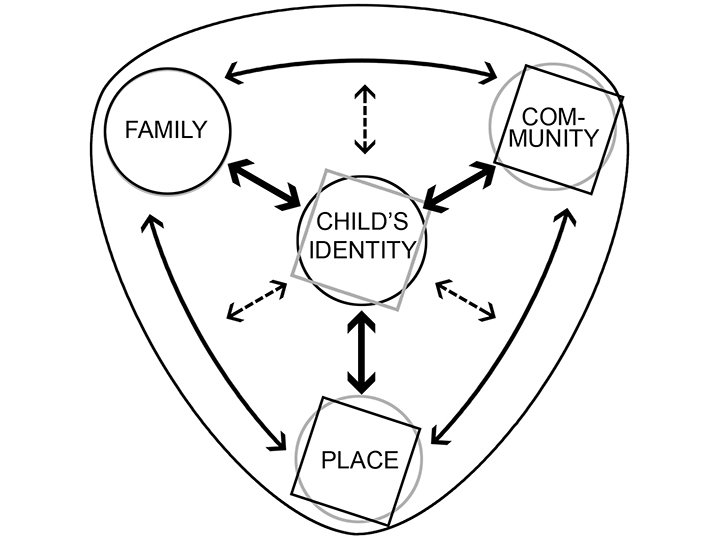 Today we see a growing complexity. After multiple moves, even the relationship to family can change as parents themselves begin to lose their original sense of a clear identity. In addition, parents often lose their traditional roles of introducing children to the community and place when they themselves do not know how life functions in this place. In some situations, where children may learn the local language before parents do, the children assume adult roles to guide their parents rather than vice versa. 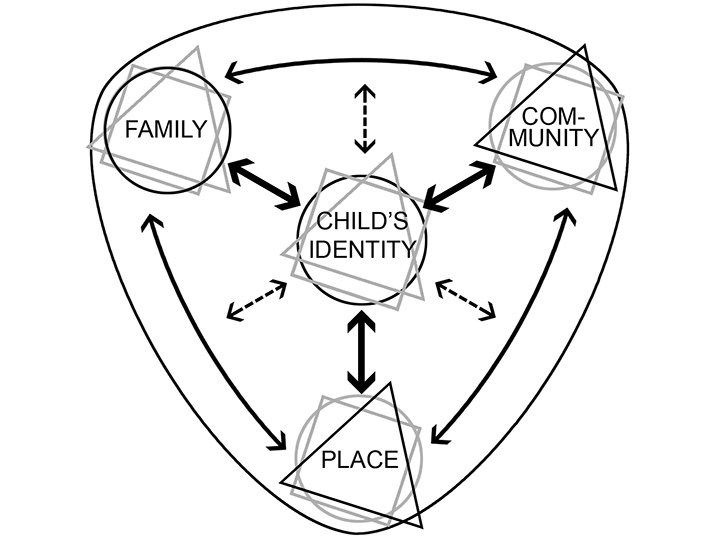 This is how it may look to some people now: 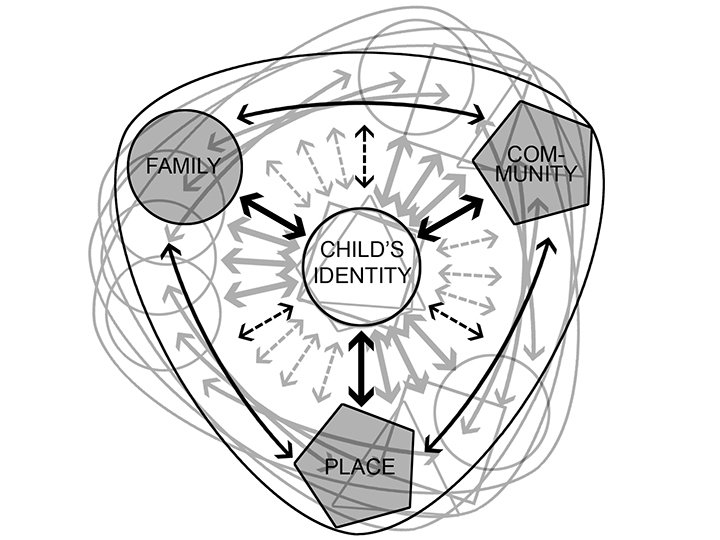 You might think, okay so what? We have more people with interesting stories, what is the big deal?

As a psychologist I can not ignore one of the most significant outcomes:

This is a generation that is living in the present.

Having no solid roots, no one place or one community that is storing your past, that is the archive of who you were, means that there is no past to relay on and fall back.

What does it mean about the future? When you don’t have this strong attachments that serve as anchors to lead the way and plan ahead, based on the context and values carried by this past, when every place and every community is a possible opportunity, there is freedom but also lack of clear internal guidance. So what are we left with?

This is a generation that is committed just to this present chapter of their life, that the past is so complex and not represented by only one place, one community, one language and the future is open but at the same time unclear.

This is a generation that can be from anywhere, many places, different families, a mosaic of cultures and influences, they can be anything, anywhere more than in any time in history, but it come with a price: Confusion, lack of clarity, feeling lost, inability to rely on the past or plan the long term future. The present is the answer. All the expectations needs to be met in the present. The need to belong, the sense of community, the search for meaning , the search for purpose . Can you imagine the potential level of anxiety? The present must work!

In my work I encounter more and more people that are struggling to feel the much needed feeling of coherence in their story. They often come with symptoms of anxiety and depression. There is so much stress in their present that any small obstacle is a potential downhill road to depression.

Perhaps part of the answer is that we need to rethink traditional ways of defining identity through nationality, ethnicity, race or even gender. In many cases the ones that embrace the complexity and are willing to find their narrative in an alternative way, are faster in resolving the conflict and moving into the opportunity side of the equation, they explore the freedom that comes with the acceptance of not fitting into old rubrics.

Daniela Tomer, founder of Global Nomad's World, knows something about migration. Not only is she a clinical psychologist who specialises in helping families and individuals deal with the issues surrounding migration, but she's the product of migration herself. Today she is at the vanguard of a growing movement of international mental health professionals who are working to create resources that will help people around the world to better deal with the complex issue that arise when they migrate.This article is a result of endless talks about identity and more with her mentor Ruth Van Reken.